Trends come and go. This year the 70s looks are right on point. I am not sure I am going to wear giant flare pants. I had some embarrassing memories about them since I fell a few times after I stepped on my own pants. 😉 But I am willing to try other 70s looks. One of the 70s vibes that I always set my heart on is fringes. Today’s look is a fringe on fringe outfit. Let me know how you wear fringes!

I don’t think it’s supposed to do that!

After that long drive to get to my in-law’s house in northern Michigan I was ready for a nice relaxing weekend. My husband’s mother was a typical mom. She always fed us a lot! That was ok with me, her cooking was pretty delicious. We had arrived on Friday evening. I drove the last hour and 20 minutes or so of the 4 hour drive and got to experience a whole list of different types of driving. I was on the freeway for my first time so was going faster than I ever did behind the wheel. I also got to drive for my first time in a snow storm. All in all, I had had enough for this trip and told my husband/driving teacher that he was in control of the car for the rest of the weekend. We had a nice home cooked dinner and spent a couple hours visiting with Mom and Dad. It was getting late by then so we all went to bed. The next morning we had another nice meal. On weekends Dad usually took over the breakfast cooking duties. His specialty was often pancakes and that was on the menu for this day. We tried to visit my in-laws at least once a month or so but didn’t always stick to the schedule. We would go up north and help them get ready for the different seasons. In spring we would help plant the flats of bright colored flowers that Dad would always get, and take out the outside furniture and get it ready for the summer. In summer usually there would be some weeds to pull or maybe some bushes to trim. In autumn the outdoor furniture went back into the garage for the winter and things would get wrapped up. In winter usually we’d help out inside the house if they needed something worked on.

On this trip we were sort of in between the big work weekends. It was just the beginning of winter so the lawn furniture had already been put away. We didn’t have much to do, so planned to just chill and relax a bit. We had our breakfast then, went to get ready for the day. In my in-law’s house we pretty much had one end to ourselves when we visited and had our own bedroom and bathroom. That’s where we were after breakfast. I was working on my makeup and my husband was washing his face and shaving. During the cold weather the houses in this part of the country often get pretty dried out. It’s because of the hot air from the furnace. Most of the water in the air is taken out by heating it so unless you have a humidifier in your house it can get pretty dry. Sometimes you will even get a small electric shock when you touch some metal in the house because of this. My husband has a bit of trouble this time of year with an occasional bloody nose. The dry air also dries out your skin and even your nose. It’s never very serious and after a minute or two with some tissue paper put in place it stops. Well, I should have said almost never. We were just about to experience the exception.

He grabbed a tissue and blew his nose. Then he grabbed another tissue, and another. Then he said that something wasn’t right and this time there was a lot of blood. That’s when I took a look and saw that there wasn’t just a lot of blood. There was a LOT of blood! And it didn’t seem to be stopping. He didn’t want to get blood on his clothes or Mom’s towels so I went out to let Mom and Dad know what was going on. Dad came to investigate and also brought some older towels to use. It was pretty clear that the bloody nose wasn’t going to stop on its own like usual so we started talking about plan “B”. The town my in-laws lived in was quite small but it did have a hospital. And that’s where Dad thought we should go. So Mom stayed home while Dad, my husband and I got into Dad’s car and drove the several blocks to the hospital. My husband was trying not to bleed all over the car so held his nose tightly to stop it leaking. But the blood was coming with so much pressure that it started coming out other areas! Our faces have all kinds of passages connecting your nose to your mouth and to your eyes and after these sinus openings filled up there was even some blood coming out of my husband’s eyes! It was a bit scary. I remember Dad taking a look and telling him it looked fine. My husband was a grown middle aged man and his Dad was still trying to make sure he wasn’t scared! I guess you never stop being a parent! Anyway, we got to the hospital shortly and a doctor was able to take a look. It was just as we thought; he had broken a blood vein. In order to stop the bleeding the doctor put a special balloon inside my husband’s nose and blew it up. This put pressure exactly where the leak was coming from and stopped it from bleeding. He suggested that my husband see his own doctor in a couple days when we went back home but for now everything was under control. There was one other thing; the doctor suggested that my husband shouldn’t drive for a day or two. Wait. What? But that means I would have to drive all the way home! Now all of a sudden I didn’t feel too well!

The Wednesday Pants – Link Up!

Because Shanna Said So- Random Wednesday 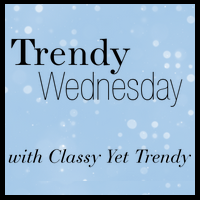